I Have Answered My Nation’s Call Tales of the Mystics, Book One
by Laurie Lucking
Young Adult - Mythology/Fairy Tale
304 Pages
Reviewed on 03/14/2018 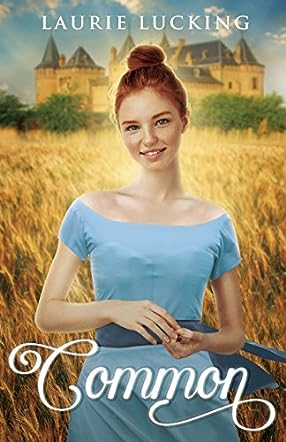 Laurie Lucking has always loved diving into imaginary worlds through books, but she didn't start writing her own stories until she left her career as an attorney to become a stay-at-home mom. Laurie is the secretary of her local ACFW chapter and co-founder of www.landsuncharted.com, a blog for fans of clean young adult speculative fiction. When she gets a break from playing superheroes and driving wind-up cars, Laurie enjoys reading, singing, connecting with other moms, and writing young adult fantasy, always with a central love story to satisfy her inner romantic. Find out more about Laurie and her writing adventures by visiting www.LaurieLucking.com.

Common by Laurie Lucking is about a chambermaid named Leah Wellstone. Unbeknownst to everyone (not her mother and even her best friend, Gretchen) she had been enjoying a secret friendship with Raphael, the Crown Prince of Imperia. When she stumbled upon a plot to overthrow the royal family, she faced the king and queen, only to be banished for treason. However, this did not stop her from worrying about Rafe (as she would like to call the prince). With the support of her new found friends, Leah went out of her way to find any evidence that would expose the traitors and ensure the safety of the crown. She bravely did all of this, but had to face someone much more sinister, which meant either life or death for her.

Reading Common was like being on a roller coaster. Laurie Lucking created these wonderful twists and turns that made you anticipate, but would still manage to successfully catch you by surprise. It kept me on my toes even past midnight! The world of these kingdoms was depicted so realistically that it’s easy to imagine being a part of it. As for the characters, they were easy to love or hate, depending on who is up for discussion. Leah, just like any other teenager, is naive but is full of pure love. She’s such an inspiration. Rafe, on the other hand, would make any girl swoon. He is a gentleman and has the makings of a great king. His unwavering love for Leah will tug at readers’ heartstrings. The entire reading process was a magical journey in itself. Readers will find it difficult to stop reading, just as I did. Common makes you want to go on and on until you realize you have reached the end of the story. It just has that kind of magical pull. It would be unwise not to include this in your reading list. Common is very uncommon, after all, and readers should not pass up such a magical adventure.