Dragged Into the Light 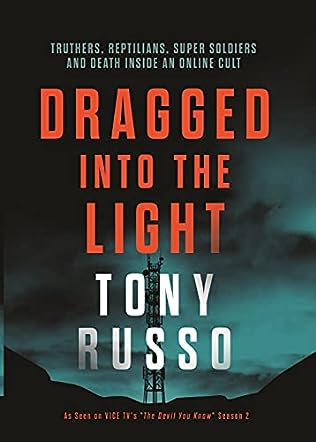 Dragged Into the Light: Truthers, Reptilians, Super Soldiers, and Death inside an Online Cult by Tony Russo is a true crime book that tells the story of a for-profit cult, internet scams, and murder. This is the story of the nefarious influence of a social media cult leader, Ohio housewife Sherry Shriner. She preached about the mysterious orgone energy and Christian prayer, proposing tools to fight against the forces of evil, including Lucifer, reptilian creatures disguised as humans, the New World Order, and others. As she grew in popularity, she magnified the lie, which pulled in an even larger following. But what readers find in this book is manipulation and conspiracy that lead eventually led to horrible crimes, including murder.

Journalist and author Russo shares disturbing stories linked to the cult and the influence that Sherry Shriner had on her followers. When she told Steven Mineo that his girlfriend, Barbara, was a witch who was going to kill him, a month later, a homicide in the backroom of a trailer would see Steven dead and his girlfriend in jail. But for the followers of Sherry Shriner, it was the fulfillment of her prophecy. Readers are presented with a cult that destroys lives through conspiracy theories, lies, and manipulation. An example would be Kelly Marie Pingilley who got so obsessed with Sherry’s message that she volunteered to work full-time for two years to transcribe her audio messages as part of preparing herself to be transformed into an angel, as part of serving God.

Tony Russo’s book is not only a succinct and captivating documentation of Shriner’s cult but is also a well-researched book that shines a strong light on the elements and practices of a cult that has a strong negative impact on the lives of the followers. Readers will understand how religious scammers and fake preachers can manipulate and coerce their followers into committing acts that justify their statements, giving them a sense of authenticity. The author shares information gleaned from following this group online, police records, and internet chats. Dragged Into the Light presents the psychology of a woman who gets herself into the spotlight as an online evangelist through scamming and conspiracies. While this book is about the Sherry Shriner cult, it explores one of the illnesses of our age: the quest for power and attention by pseudo-religious leaders and the methods they use to deceive their followers. It is an eye-opening, painstakingly researched book that will enlighten readers about the mechanics of religious manipulation.

“An exceptionally well-written book about an extreme group of people with extraordinary beliefs” was the summary that came to mind as I struggled to describe what I had just read about in Dragged Into the Light by Tony Russo. Even that doesn’t adequately capture the bizarreness of the scenarios and characters that left me gobsmacked and wondering, page after page, what Russo would disclose next about Sherry Shriner, orgone energy, and followers who truly believed she was in constant communication with God, whom she called “Dad”. Huh? Tony Russo has put an extensive amount of research into Sherry Shriner, seeking out videos, podcasts, books, and social media that would explain how an Ohio housewife with delusions of being a supreme being gained such allegiance. He has included copious references at the end of the books to support his findings.

But what is most enjoyable about Russo’s presentation, given his disturbing subject, is his approach to his content, his friendly tone, and the way he lets readers know that he is as stunned by what he’s learned as we are hearing it from him. He’s careful not to describe Sherry’s followers as “crazy”…which for those of us who don’t buy into the idea that demons are everywhere and much of society, especially those in power are actually reptilians…would be the first word that comes to mind. But no, Russo is sympathetic: he sees them as more likely depressed people trying to find some reason for the loneliness and feelings of non-fulfillment that mark their time on earth. They are yearning for a better tomorrow and however she did it, Sherry Shriner gave that group what it needed: hope. Russo’s approach in this book is to focus on a handful of those people and show how they ended up as Shriners “soldiers”… and the tragedies that resulted from their loyalty to “the Queen of Heaven”.

Some of those with strong religious beliefs who are into the Bible and prayer might disagree with this statement in Dragged Into the Light: “People say the strength of faith is doubt…the stakes are higher for people who believe in real demons on earth and the real possibility of being dragged into hell.” Personally, I find that statement very accurate. If it wasn’t, the hold that organized religion, the Bible, and its cultural equivalents have on people wouldn’t have lasted thousands of years! Feel free to argue, but read Dragged Into the Light first. Marvelous reading and writing.

Dragged Into the Light: Truthers, Reptilians, Super Soldiers, and Death inside an Online Cult by Tony Russo is a well-researched and brilliantly written non-fiction crime book that follows the work of social media cult leader, Sherry Shriner. In this book, the author discusses how this unpopular woman came into the spotlight, the tactics she has used and continues to use to get a huge following, and how she maintains that following, including lies and conspiracies. In this book, readers will learn about the ridiculous beliefs she propagates, the dangers she puts her followers into, and the crimes that result from her online ministry, including murder.

Dragged Into the Light is a powerful book that explores the way that many people are led astray by phony preachers. In this book, readers will learn the story of Steven Mineo who is told by Sherry that his girlfriend is a witch. When he ends up dead in a homicide and the girlfriend is arrested for murder, Sherry’s followers believe more in her divine and prophetic powers. It is hard for them to see that both the victim and the perpetrator were manipulated up to that tragic moment. There are many stories of followers ending up abused in incredible ways. This book is the fruit of extensive research that includes internet chats and transcripts and police records. Tony Russo comes across as a skilled investigator and journalist and as a writer who communicates with clarity, analyzing the beliefs shared by the followers of Sherry Shriner with a lot of intelligence. It is an eye-opening book and one that warns readers of the tactics used by cult leaders to ensnare them.