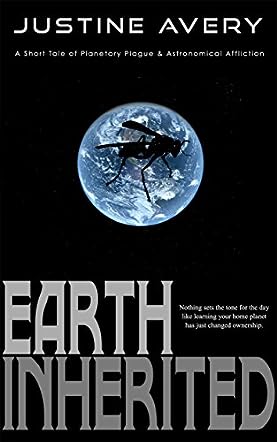 Earth Inherited: A Short Tale of Planetary Plague & Astronomical Affliction is a science fiction short story written by Justine Avery. In a matter of just five earth days, momentous world-changing events took place that most certainly merited the selfies Nathan took in that conference room when he was supposed to be going out for quesadillas with his cubicle neighbor. It had been a strange week, starting with the melt-down of his two favorite anchorpersons: Matt Mandigo was inexplicably at a loss for words while the comely Chrissy Watkins wriggled in discomfort. They were not the only newscasters to have stunned their audiences with their absolute failure to deliver the canned news performances so many early-risers depended upon. There were reasons for this aberration; though earth's impending doom, or rather, the doom of earth's dominant species, was an event most stayed blissfully unaware of. Nathan wasn't quite so fortunate. His boss had decided to cancel Nathan's lunch and instead let him handle the crazy who was waiting in the conference room. The being was impossibly strange and alien, with clusters of eye lenses and unsettling facial filaments that swayed as it spoke, and Nathan couldn't help but be impressed with the intricacy of the prank that was being played upon him. He just had to get up close and get a selfie -- it would go viral and make him famous.

Justine Avery's wry science fiction short story, Earth Inherited: A Short Tale of Planetary Plague & Astronomical Affliction, is a sly and clever peek into the strangeness of that uncanny television series, The Twilight Zone, complete with an otherworldly being who has come to claim his inheritance, albeit one despoiled by the sluggish beings that have multiplied out of all proportion and Nathan, the office drone, who somehow is appointed the human representative to make earth’s first contact with an alien species. As I read this clever and sharp little tale, however, I began to see parallels and inside stories, and I wondered whether the Astronomical Afflictions could not be considered the Planetary Plagues in many respects. Avery gives the discerning reader a lot to think about in this dryly humorous tale that has some very dark aspects indeed. As with Avery's other short stories, there's often more happening behind the curtains than out on the stage, and that's a fine thing. Earth Inherited: A Short Tale of Planetary Plague & Astronomical Affliction is most highly recommended.

It seems the Earth has a new owner! Welcome to the new, wonderfully-oddball short novel by Justine Avery. First, I must admit, I’m a big fan of this writer. Her writing is off-the-wall, slightly absurd and always, ALWAYS spellbinding. It’s wordy, yes, all of her novels are, but every word is there to play with you, to trick you, and to pull you relentlessly in. This is an author who is not frightened of experimenting with her plots, her characters and her language. It’s refreshing. It’s enticing. And I love it.

Now to the plot. Is there a plot? Yes, sort of. It’s in there. But if you are looking for a plot-driven story, this is probably not for you. But what you will find is a host of splendidly-developed characters that will not only fascinate you but will also force you to think. There’s a lot of commentary hidden in here, on how the world works or, indeed, how it’s not working. But the author’s sly and has such competent writing skills, she can put over her message without the reader ever feeling overwhelmed.

But what I love the best is the comic elements. They spill from every tiny chapter and every eye-widening simile. This author is funny. But not ‘silly funny’ but ‘clever funny’. For example, when the ‘owner’ of the planet performs a waggle dance, and the author informs us, ‘The dance, however flawlessly executed, did not translate.’

I would happily recommend this story to anybody who enjoys satire and being surprised. Had a long day at work? Feet killing you? Then curl up in your bed with a Justine Avery story. It’ll make you smile.