by Stephana I Colbert 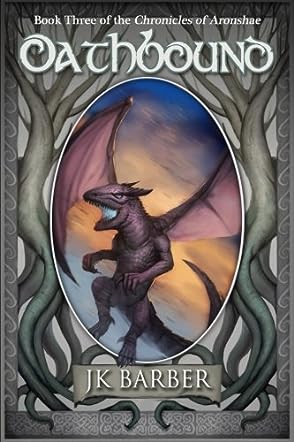 Jay and Katie Barber combine their names to write under the pen name, J. K. Barber. The couple lives in Roswell, GA with their children, Maya and Gabe, as well as their four rescue cats. Jay graduated from The University of Georgia with a degree in English literature, and Katie graduated from The University of Colorado at Boulder with a degree in English creative writing. They combine their educations, writing together as a co-author team, for projects such as the "Chronicles of Aronshae" and "Mervidia."

In addition to their collaborative work, Jay and Katie also have individual titles: "Hidden Path," a prequel to their trilogy written by Jay, and "Fallen," a post-apocalyptic angel novel written by Katie. The Barbers enjoy being parents, table top gaming, reading, mixed martial arts, riding motorcycles, and playing MMO games such as World of Warcraft.

J.K. Barber’s Oathbound: Book Three of the Chronicles of Aronshae, is the third in a series and opens with Ra’thet, a war lord allied with the ice queen Salamasca, being interrogated by the Illyander King’s Guards, after their defeat at the Frozen March with Salamasca herself fleeing to the Eastern kingdom. Although the Illyander kingdom is victorious, the fact that Salamasca is still alive and is licking her wounds and strengthening her army means that the kingdom cannot have lasting peace. Indeed, Aronshae is still in danger from the cruel queen and Sasha and Katya, the Snowhaven sisters, who are blessed by the Great Mother with the power of her avatar, possess the mystical power to defeat Salamasca and her minions. Together with the hunter Jared, Iluak and the priest Talas, the twins set out to eradicate this threat forever. It is a perilous mission and the twins know that in this fight, they will need all the power of the Akor’shi-kai, which will lead to their certain deaths.

Book Three of the Chronicles of Aronshae, Oathbound, is a mystifying, fast-paced tale of the fight between good and evil, between the Snowhaven sisters and the power-hungry Salamasca. The story unfolds in the kingdom of Illyander and brings us to the exotic east in this fantasy world inhabited by queens, kings, sorceresses, and dragons. The characters in the story are very well developed and colorfully described so that the narrative itself becomes vivid and real. It is difficult not to be caught in the emotional upheavals between Sasha and Jared, Iluak and Katya, and Olivia and Talas, when they set out to find the ice queen and face their probable deaths. Authors J.K. Barber, a husband and wife team of writers, certainly know how to keep the suspense and mystery going until the final pages of their book, with a writing style that is both straightforward and richly descriptive. This is a book that will bring readers into the very heart of the world of Aronshae itself and temporarily allow them to become part of it.