Queen of the Air 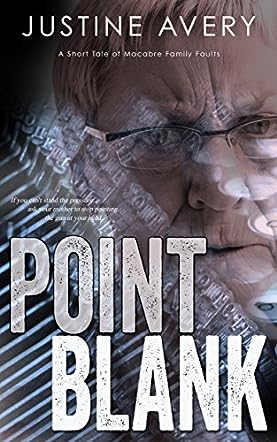 Point Blank: A Short Tale of Macabre Family Faults is a short story murder mystery written by Justine Avery. Michael never realized that she was this insane, though she had terrorized him his whole life. Now, with the gun pressing down into his skull, he could smell his mother’s fetid breath as she demanded that he write his father’s last will. He was a writer, after all, she had gloated, until she had finally given up and slammed him into unconsciousness with the butt of her gun. Michael, the would-be writer, was a disappointment to his parents, unlike his younger brother, Tim, who had a real job, a wife and a family. When he regained consciousness, Michael rushed to his brother’s house to tell him what happened, but Tim was skeptical of course, and refused to take the drive. When Michael reluctantly returned alone to the estate, he was horrified when he heard his mother returning to the library, and quickly hid in the concealed closet he’d known about since he was a child. She was dragging something heavy and in his mind he conjured up the horrific image of his murdered father.

Justine Avery’s dark short story, Point Blank: A Short Tale of Macabre Family Faults, is a disarmingly clever black comedy about a would-be writer with a lifelong writer’s block and his long-suffering parents. Michael and Tim’s mother is convincingly terrifying, and Avery’s descriptions of her are bound to provoke shudders in the most hardened horror fans’ hearts. This well-written and atmospheric story is suspenseful and well-plotted. You can feel the despair and cold chill in the large estate house, and sense the dread Michael feels at the approach of his mother. One can’t help but wonder how he had managed to stay sane in that house for his forty plus years, a captive audience for his mother and father, who remind him all too vividly of his failures. Point Blank’s rich images are stark and unforgettable, and the story is a sterling example of just how good horror can get. It’s highly recommended.

this short story is full of surprises, Great read. Interesting twist as usual with this clever writer.

Even the twists have twists! You know a story is good when you intend to read the first page and save the rest for later but fail to put it down until finished. Justine's style of writing never fails to grip me, love the plots, the humor and the attention to detail. If you have read other Justine Avery stories then you will love this, if you haven't read the others then you will want to after reading this!