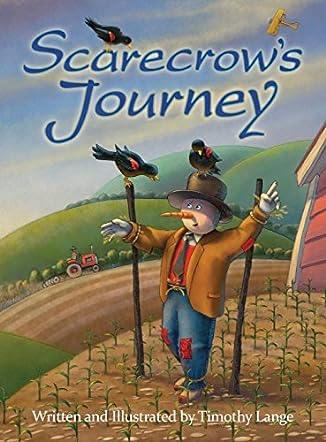 Scarecrow’s Journey is a children’s book written and illustrated by Timothy Lange. Scarecrow’s job on the farm is to scare away the birds from the crops, but all he wants to do is be like them. Scarecrow wants to fly. The birds tease him because he cannot fly. Many years go by. The farmer grows old, the crops die and the livestock are sold, leaving Scarecrow sad and alone. Then, one day, a large storm rolls in, bringing with it great winds. Scarecrow struggles free of his restraints and becomes airborne, bumping into strange things along the way. The fence and windmill do not mind the inconvenience of a scarecrow hitting them, but a surprised bull isn’t so impressed to have a scarecrow sitting on his head. Another gust of wind sees Scarecrow flying so high that he is almost hit by a small plane. The exhilarating feeling of flying is a dream which has finally come true for Scarecrow, until the wind eventually stops. When Scarecrow hits the ground, the plane’s pilot lands beside him and offers him a new job, which makes Scarecrow feel happy all over.

Not only is Timothy Lange’s story of a scarecrow’s dream inspiring, showing children that nothing is impossible if you want it badly enough, but it is also fun! Scarecrow’s Journey encompasses incredibly sensitive social issues such as loneliness, depression, abandonment and bullying, but also gives quite a giggle when the typically inanimate scarecrow gets his dream and is able to fly. When he flies so high, I wondered if he would ever come back down again, and when he did, I started to feel bad for him ... but not for long! Determination paid off, bringing forth the impossible, and creating opportunities for the scarecrow which he would not have otherwise had. The illustrations throughout the book are bright and colorful, bringing the tale to life in such an exciting way. I fully enjoyed Scarecrow’s Journey and recommend this book as a great story time read to children aged 4-7, so that they, too, can learn that if you want it, aim for the sky and you might just get your wish.