She Marches Through Fire 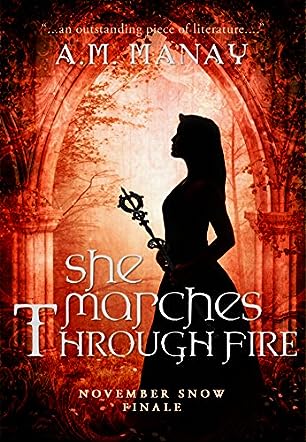 She Marches Through Fire by A.M. Manay is the final book in the November Snow series. After November is left injured after the attack on the president, her former captor, Luka, becomes a fugitive and her enemy, William, gains the upper hand. As they search for a cure to the poison slowly killing her, November must also seek out an ancient weapon called the scepter. November faces a betrayal that sends the U.S. government after them, while William's deadly attacks spark a potential war that could threaten the very existence of the peaceful supernatural community of Eden. November will risk everything to harness the power of the scepter and save those she loves.

A.M. Manay has complex characters that are complicated and flawed, with layered personalities and a fascinating blend of good and bad. Every character, no matter how good, is capable of doing bad things, just as the villainous characters are capable of having redeeming moments. Manay gets to the heart of these characters by exploring their guilt, their reasoning, and their emotions, making it easy to understand them even if their actions are grotesque. Of those characters, Luka has committed some of the more horrific crimes yet Manay explores his redeeming side, mainly seen through his bond with November, but it's that subtle guilt and detachment he has underneath everything he does that rounds him out. Guilt plays a key role as the characters are struggling with their past actions and how these decisions have impacted the people they've hurt. They're each dealing in a different way, with Savita blaming herself, Nigel seeking amends, and Luka using snark as a facade.

She Marches Through Fire focuses on themes of closure, guilt, and second chances, centering on the peaceful community of Eden, November's grief over Ilyn's death, and the impending war brought on by William. Eden, as the name implies, is a paradise where different supernatural beings live together in peace, with war and violence as a constant threat in the background that has the potential to destroy this wonderful place. Eden acts as a place for second chances and provides several of the characters with an opportunity to redeem themselves. Nigel is the most prominent one to find a new beginning and a way to redeem the actions of his past, though his journey is primarily in the background of the story. Every character's actions influence the story as a whole, often creating a chain reaction that affects everyone else. She Marches Through Fire is a brilliant read, concluding November's story in an unexpected way with danger, romance, and surprising twists.