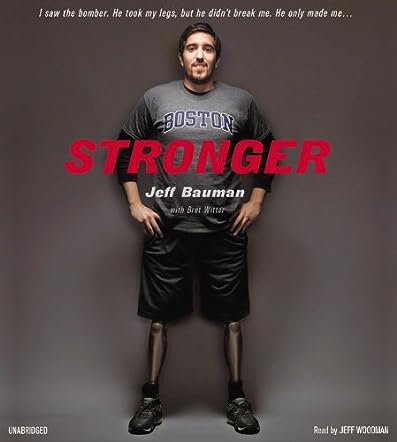 Stronger by Jeff Bauman (with Bret Witter, as read by Jeff Woodman for Hachette Audio) is an emotionally affecting, patriotic, unflinchingly honest Everyman tale of the road back from unthinkable and senseless tragedy to a place of trust, forward-looking optimism and seemingly impossible reflective gratitude. As its title implies, Stronger is a purpose-driven narrative focusing on lessons learned and gifts received in the wake of overwhelming loss. The now-famous photo of Jeff Bauman in a wheelchair, missing both of his legs in the aftermath of the April 2013 Boston Marathon bombing, became one of the most universally recognizable images in the world within hours of the tragedy and plunged Jeff into a public life for which he was neither prepared nor forewarned. To lose one’s legs is indeed a tragedy; to have to recover with the world watching is perhaps an even greater challenge. At the time of the Boston bombing which took his legs, Jeff Bauman was about as much of a ‘Regular Joe’ as one could imagine - working part time for a low hourly wage that barely covered expenses, on hiatus from college after a mixed success in freshman year, living in the moment, without a meaningful relationship, and struggling to find a productive place in an increasingly complex world. He was not a success, not a failure, and not moving forward. He was ‘just getting by,’ as so many do. His family was fiercely devoted to one another but dramatically dysfunctional, with opportunities for advancement and progress always seeming to be just over the horizon. Then, in one blinding moment, Jeff was forever separated from all that he had known. He woke up in a new world, with horrible injuries and the long road to recovery eclipsing all that he had known.

Although Jeff Bauman’s recovery and long list of post-injury accomplishments are certainly remarkable, they are neither the focus nor the point of Stronger. The most remarkable feature of this narrative is its absolute commitment to honesty. The days when Bauman refuses to take the high road in his recovery process far outnumber his days of wisdom and vision, and he reports them just as they happened, warts and all. His honesty is a mirror, in which few of us reflect as being all that we could be. He is the quintessential modern anti-hero, called to adventure by circumstance and straining against his fate on every step of the journey. He responds exactly the way so many of us would - with anger, self-pity, self doubt, self-loathing, fear, regret, and a resounding ‘why me?’ sensibility. While honesty is the lens through which Stronger turns our vision inward, the key to its extraordinary power is that Jeff Bauman actively chooses not to respond with hatred - will not allow that emotion even to enter into the mix. This is the divine spark which ignites the reader’s imagination: this is the super-human aspect to Bauman’s hero journey that resonates and lingers long after the last page has been turned. We are inspired and indicted all at once by Bauman’s patent refusal to allow hate to color his response to such staggering loss, when so many of us would do exactly that. The conclusion of Stronger juxtaposes Bauman’s triumph in learning to walk on his new prosthetic legs with the 2013 Boston Red Sox victory in the World Series; here again, it is the unflinching honesty with which the narrative has been rendered that delivers such an ending from being maudlin or cloying. Would-be cynics are shown the door by the pure sweetness of an ending so happy that any attempt to scoff would place one decidedly outside of the human condition.

Jeff Woodman’s reading of Stronger for Hachette Audio effectively captures the ordinary aspects of Bauman’s personality and pre-bombing existence while revealing the extraordinary aspects of his character as it evolves through the narrative. He renders the text with the exact degree of intimacy required to make Bauman real for the listener, without ever falling prey to the actor’s urge to take center stage. Stronger by Jeff Bauman is a graceful, triumphant bow on a blood-soaked stage - the kind of cathartic curtain call that reminds us of the ageless miracle of human resilience in the face of senseless tragedy.