The Boy Who Dreamt the World 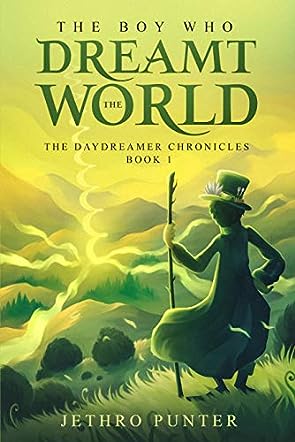 The Boy Who Dreamt the World by Jethro Punter is the first book in The Daydreamer Chronicles. Adam is no stranger to daydreaming and how it gets him into trouble for drifting off during class. Now, he’s told that it’s his greatest power. When his mom disappears and he wakes up in another world called the Great Dream, he discovers he’s a Daydreamer and that he can cross between this world and his own. A dangerous threat stalks the world of dreams. The Horror is days away from reaching the Stairway of Dreams and he may be the only one who can stop it. A new girl moves into town and falls mysteriously ill, leading Adam to investigate a connection between her and the Great Dream.

Jethro Punter delivers a fascinating world of dreams that blend magic, imagination, and mystery for an unforgettable adventure. But no place that has dreams is complete without a few nightmares. The story is filled with several dream references throughout, thanks to a world existing of dreams. The Reverie is a world having various places that tie dreams together like the Stairway of Dreams, the Weave, and the Horror. This other world focuses on imagination as the greatest asset someone can possess and comes to life as Adam discovers the extent of his abilities. The mystery at the center of the story focuses on the disappearance of Adam’s mom and the family secrets she’s hiding, which offer plenty of surprises around every corner for him to discover.

The characters in the Reverie are charming and quirky with the Five as the main people Adam encounters. Imagination and dreaming are poignant themes that are a large part of who Adam is and is something he’s never lacked. Punter also uses this as a conflict within Adam as he has the desire to do something real and to have real adventures. The Boy Who Dreamt the World is a story with heart, mystery, danger, friendship, and intrigue in a place where dreams come to life and anything is possible.