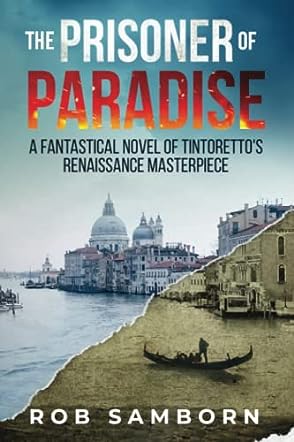 In addition to being a novelist, Rob Samborn is a screenwriter, entrepreneur and avid traveler. He’s been to forty countries, lived in five of them (including Italy) and studied nine languages. As a restless spirit who can’t remember the last time he was bored, Rob is on a quest to explore the intricacies of our world and try his hand at a multitude of crafts; he’s also an accomplished artist and musician, as well as a budding furniture maker. A native New Yorker who lived in Los Angeles for twenty years, he now makes his home in Denver with his wife, daughter and dog. For more information visit www.robsamborn.com.

Standing before the world's largest oil painting, Tintoretto's Paradise--a monumental depiction of Heaven--in Venice, Nick hears a disembodied whisper, "Amore mio." His wife Julia believes him to be delusional and insists he see a doctor, but Nick insists the voice is real and returns to the museum. Blacking out in the museum, Nick flashes back to life as a 16th-century Venetian swordsman tasked to seduce a married aristocrat, Isabella Scalfini, but instead, he falls in love. In the present, through the painting, Isabella implores Nick to liberate her from a powerful order of religious vigilantes who judge and sentence souls to the canvas for eternity. The religious order still exists and will stop at nothing to keep Nick from releasing not only Isabella but thousands of other imprisoned souls whom the order claims are evil.

Rob Samborn's debut novel, The Prisoner of Paradise, is a winner. Combining romance, historical, metaphysical, and conspiracy elements into a thriller that supersedes several of today's best-selling authors is no easy task. However, Samborn's writing style indicates a writer whose skill shines through its smooth flow, akin to that of the great names in thriller fiction from Poe to Ludlum, Koontz, Child and, yes, Dan Brown. The art world setting of Venice, Italy's past and present is carefully and explicitly portrayed, exposing a sense of reality interwoven within a masterfully orchestrated fiction story that first-time novelists often miss. Rob Samborn doesn't miss a trick. Every character is true to life. Every scene is perfectly set, and the action flows like the scenes from a well-directed and photographed movie. The Prisoner of Paradise is a tale with a solid sense of reality, which moves through time periods, entailing action, adventure, romance, the everlasting battle between good and evil, and the possibilities of a metaphysical universe. It's a story you don't want to miss by an author you'll be hearing a lot more about.

The Prisoner of Paradise is a work of fiction in the thriller and suspense subgenres and was penned by author Rob Samborn. Written for the mature adult reading audience, this work contains sexual situations and sexual violence, other instances of violence, and the use of explicit language throughout. Past lives and ancient mysteries collide in this fascinating story when Nick and Julia O’Connor find their romantic holiday to Venice interrupted. Nick has a powerful vision of a life he once lived and a love he once knew, only to find that the soul of the long-lost Isabella still longs for freedom. As his 16th-century self threatens to take over, present-day Nick struggles to maintain control.

Author Rob Samborn has crafted a masterful and suspenseful work of thriller mystery with plenty of fascinating speculative and historical concepts woven into its rich tapestry. It was refreshing to see a novel that avoids genre stereotypes, borrowing all the best bits to create an original story with romance, drama, mystery, and intrigue aplenty. I also sincerely enjoyed the dialogue and how the presentation shifted between historical and contemporary characters and references, but it was also always presented in an accessible and easy-to-read style. The plot moves at a fast pace to take readers through plenty of action, with some highly exciting later scenes that turn everything you thought you knew on its head. Overall, The Prisoner of Paradise is a truly sensational tale that fans of historical-contemporary crossover thrillers will not want to miss.

Some novels are worlds where we can join an adventure. The Prisoner of Paradise by Rob Samborn offers two worlds where we don’t just join the ride but live in it as well. It’s a thriller mixed with fantasy in which art and romance link the past and the present, and it fundamentally demonstrates a sensual relationship between visual art and those who look at it. In the story’s present time, Nick O’ Connor is recovering from a head injury during a hockey game. While recovering, he spends time with his wife, Julia, in Venice. During a museum tour, as Nick tries to appreciate Tintoretto’s Paradise, a female voice--a woman from the painting--begins to speak inside Nick’s head. He convinces himself that it is probably the result of his concussion, but as he blacks out, he is transported into 16th-century Venice. A woman named Isabella Scalfini seeks his aid to release her from the canvas, as she was imprisoned there by a powerful order of religious vigilantes. Nick will become drawn to Isabella and will become torn between a past and a present love. On top of that, to help free Isabella would also mean freeing other imprisoned souls, and the order will not allow it to happen.

The Prisoner of Paradise is an enchanting story in which a revered work of art becomes an instrument of an episode from the past. I admire the way Rob Samborn handles the treatment of his characters, notably Nick. As you can very well judge from the way Julia educates him about Tintoretto’s masterpiece, he is not much into art, and his accident says plenty about his love for sports. Then he gets transported into an astonishing world that he knows little about, and must learn more about it, as he becomes drawn to a beautiful woman from this particular past. Samborn is clearly interested in history and popular art, using them as effective devices to create a hyperlink structure where the lives of characters from the past and present become intertwined. The Prisoner of Paradise is filled with ideas about the meaning of art and the concept of freedom and falling in love. I am not surprised why I was drawn into the story, and you will be, too.