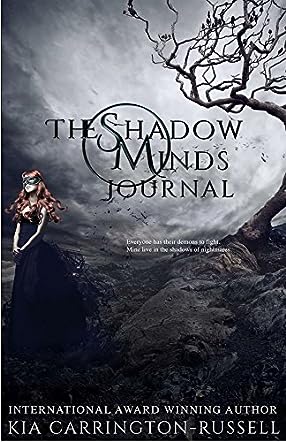 Kia grew up in the Darling Downs Region in Queensland, Australia. Graduating High School, she pursued a career in freelance journalism. In 2014, having always had a passion for writing fiction, she decided to follow her dream of becoming an accomplished author.
During the weekdays Kia works at her Monday to Friday job in Logistics and Transport. She leaves her book worlds to the night and weekends, being well described as a driven young woman.
Now living in Brisbane, Australia, Kia has a can do attitude, a strong will and the touch of kindness that makes it hard not to fall in love with her. Announced ‘The Best New Author of 2015’ by AusRomToday, and being awarded numerous awards, she has no intentions of stopping. Kia Carrington-Russell is definitely the new author to be looking out for.
Learn more about Kia at www.kiacarrington-russell.com and follow @kia_crystal on Instagram.

The days were fine, and with seven demons contracted to her, Vivian had their forms and their knowledge at her disposal. She could hold her own against most, except perhaps a choice few. Lord Haymen was one of those she wouldn't cross; besides, she was his to command thanks to her somewhat unwilling rebirth into the world of demons, angels and demon hunters. It was the nights she had to fear. In the night there were dreams, and through the dreams demons came for her, but in the world of slumber she had no powers at her disposal. She could only run, hide, and hope she wasn't worn down enough for them to take her over. It was something all those in her line of work feared, but she had more cause than most. Unknown to anyone, she'd had those dreams long before her rebirth, and she feared what this could mean. Another curse plagues her. She has desires that need satiating, but anyone she takes as a lover ends up dead within three days. Her latest conquest brought with him serious consequences, and opened up the perfect excuse for Haymen's enemies to get closer.

Kia Carrington-Russell's The Shadow Minds Journal is a fast paced, tense, gripping adventure of lust, discovery, terror, hatred, tolerance, and power plays. Vivian finds herself caught between three powerful forces: Haymen, the angel of war, and the creatures who hunt her from the shadows. Being well written in alternating first person narrative, with each chapter header making clear whose perspective you are reading, adds to the up close and personal feel captured by this supernatural tale. There are graphic descriptions, atmospheric scenes, and excellent examples of building tension. As a reader, it is impossible not to want to uncover the mystery behind Vivian and the powers she possesses, not to mention seeing how the growing relationships between characters will change from one moment to the next. An involved and inspired read that is certain to please lovers of the genre.

The Shadow Mind Journals is the first book in a new series by paranormal author Kia Carrington-Russell, set in a world where all kinds of creatures lurk in the shadows; demons, angels and all those in between. Vivian Lair is a Guardian, which means she must uphold the treaty between angels and demons as they move about the human world and the city of Shabeah. She is contracted to seven demons, which gives her free access to their powers as she takes direct orders from Haymen, one of the highest demons of all. But when Haymen sends her on a mysterious mission, one that stretches the limits of her loyalties, Vivian must figure out where she stands in the upcoming war that's brewing. In a world where the wrong move can mean a long, painful death, Vivian must act quickly and figure out what's really going on before someone gets to her first.

The Shadow Mind Journals by Kia Carrington-Russell is an action-packed book as the reader is dumped right in the middle of this strange new world of Shabeah. It's a world that's not for the faint of heart, but Vivian proves herself to be a capable character as the action and tension ramp up with every page. Fans of the paranormal will find themselves drawn along quickly by the action as Vivian takes names and breaks hearts. But her own heart is a little vulnerable as well when a potential love triangle brews ... with her as a former human firmly in the center of two very mythological beings' attention. Carrington-Russell keeps a thread of mystery throughout and luckily for fans hungry for the next book, she leaves the reader with a sneak peek that is sure to whet appetites.

It is 2986 and the world is now inhabited by an uneasy alliance of witches, demons, angels and the poor, unimportant and weak humans. The city of Shabeah is ruled with an iron fist and ruthless violence by the Lord Demon himself, Lord Haymen. Until her death, Vivian Lair was a simple, fun-loving human who was deeply in love with her partner. Now that she has been reborn, she is contracted to no less than seven demons who reside inside her and she is one of Haymen’s elite Guardians whose ultimate job is to do whatever their master bids. This is the violent, evil and terrifying world presented to us by author Kia Carrington-Russell in her fantasy The Shadow Minds Journal. Vivian’s job is to help maintain the uneasy alliance between the demons and the angels, and to destroy demons who have broken that treaty. When she is accused of murdering an angel, she comes into contact with the powerful Angel of War, Gabe, and begins a journey that will ultimately allow her to discover who she really is.

This is the second Carrington-Russell book I have had the pleasure of reading and this author is definitely one who grows on you. In The Shadow Minds Journal, there is a noticeably darker and more sinister tone than the first book of hers that I read. Vivian, as a lead character, is beautifully drawn, with her extreme confidence and arrogance perfectly softened by her beginning realisation of who she may actually be. The sexual tension in the story was definitely a highlight, as a reader, and the actual sex scenes themselves were realistic, exciting and satisfying. The conflict in Vivian’s mind between her fealty to Haymen and her unexpected and unwanted connection to the angel Gabe creates excellent tension in the narrative, which the author exploits to the fullest. The ending allows for the next iteration of The Shadow Minds Journal and a short preview of the next book in the series just teases the reader to want to explore more. Demons, witches, and angels have all been done to death in recent years, but I found Carrington-Russell to have a new, fresh and exciting handle on the genre. Well worth a read.

The Shadow Minds Journal is a fantasy novel by award-winning author Kia Carrington-Russell. Our heroine is Vivian Lair, struggling to survive in a future world set in the year 2986. In a survival-based existence, Vivian is contracted to seven demons in order to fulfill her orders from the lord of the Underworld, Haymen. Vivian is able to use the powers of these very different demons, and her overall goal is to keep the peace between angels and demons in the human world, particularly in the human city of Shabeah. As if Vivian’s life wasn’t complicated enough, she traps herself between huge powers of war, and it may only be the Shadow Minds Journal which can help her to break away from those who possess her.

Kia Carrington-Russell presents a lavish world with a really solid concept. It reminded me a little of Daughter of Smoke and Bone in terms of tone and setting, but The Shadow Minds Journal is far darker and more adult in its aspect. Vivian Lair is both a tormented heroine and a badass female lead, and I enjoyed the way she makes the most of her abilities, even though she would rather not be cursed by them. I found her to be the strongest character by far in the novel – it’s not really an ensemble piece – but Vivian was so changeable that it was always fresh to read about her next endeavor. The Shadow Minds Journal comes highly recommended for readers seeking solid fantasy world-building, brutal wars and strong female heroines.

The Shadow Minds Journal by Kia Carrington-Russell is the paranormal story of a reborn teenager named Vivian Lair, possessed by demons that provide her with unassailable powers. This comes at an incredibly steep price as she is controlled by the dark lord demon, Haymen. Back in the human world, she has been burdened with the job of balancing a fragile peace between angels and demons. Vivian's powers are lost when she is asleep and she becomes the one under pursuit by dogged hunters, alongside her lovers who inexplicably die within three days of intimacy. Gabe, the Angel of War, also keeps Vivian in the cross-hairs as she struggles to survive after a stunning accusation, keep her secrets, and decimate those who are in breach of their treaty.

Wow. Kia Carrington-Russell has truly kicked off the start of this new supernatural series with a prequel that shreds any preconceived ideas die-hard fans of the genre may harbor. I loved having a strong female protagonist and shifting first-person points of view. What a world this style of writing opens up, commanding more than just Vivian and forcing me to also become a part of the story. The writing is clean and tight, the action and romance are first rate, and Vivian is a character that is just so easy to root for. There are twists and subplots galore, all of which converge in delicious harmony. I'd recommend this book to all who enjoy darker reads with vivid scenery and characters that are as engrossing as they are alive or, more appropriately, disturbingly undead.