by E. A. Tobolski Erin, Roderick, and the Diffability Bunch 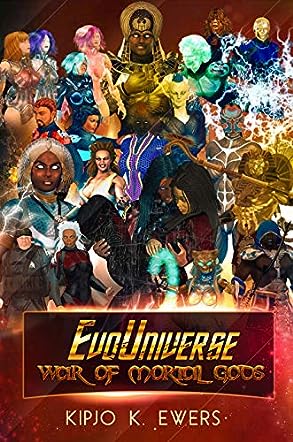 Kipjo K. Ewers was born on July 1, 1975. At an early age, he had an active imagination. By the time he started kindergarten, he would make up fictitious stories, one of his favorites was about a character named “Old Man Norris,” who hated everyone in the world except for him.

When he attended our Lady of Victory Elementary School in Mount Vernon, he continued writing and reading stories to his classmates. His teacher, Mrs. Green, told him the children would laugh, but she would remind them that some of the great stories they read came about were written.

After elementary school, he went to Salesian High School in New Rochelle, NY, then on to Iona College.

He would work for several major firms and companies within the New York area, but his passion was to become a journalist/writer.

Therefore, it is not surprising he decided to write his first book/novel.

Kipjo began working and creating a new superhuman universe, finding inspiration and solace in losing his first daughter due to an unfortunate miscarriage that devastated both his loving wife and him; he began writing a hero origin story now titled “The First.”

After publishing “The First” in 2013, Kipjo wrote two more follow-up novels to the series, a spin-off novel titled the Eye of Ra and a romantic supernature novel titled “Fred & Mary.”

Now known as the EVO Universe, Kipjo continues to write to expand the series and create new projects for the foreseeable future.

War of Mortal Gods is the first book of Kipjo K. Ewers' epic fantasy EVO Universe Presentation. Thracian royalty Prince Merc and Princess Attea's attempts to arrest Earth's hero Freedom, a.k.a. Sophia Dennison, almost ends in disaster as Sophia threatens to go supernova. But the timely arrival of the Anunnakian cousins -- Lawrence Danjuma, Bastet, and Anubis -- prevents the catastrophe, and Sophia willingly surrenders herself in exchange for her daughter's life. Finding a lack of options, Sophia is forced to defend herself in front of the Dominion Council after being wrongfully implicated on false charges. Meanwhile, Lord Horus revives his wife Sekhmet to carry out his plans of conquering the universe. The Eyes of Ra, Lawrence, must now heed Amun-Ra's warnings and return to Earth once again to identify the puppetmaster.

Sex, violence, and powerful beings vying for power, War of Mortal Gods feels like a high fantasy version of Game of Thrones with superhumans and demi-gods. With a fast-paced plot filled with action, drama, and political intrigue, author Kipjo K. Ewers' galaxy-spanning epic entertains you from start to finish. The cast of characters is quite large, but every POV character gets a decent amount of page time to make an impact. You instantly start rooting for Sophia, Lawrence, and his cousins, but the antagonists -- Merc, Attea, High Regions Nelron, Horus, and Sekhmet -- feel similarly compelling. The action scenes are described vividly, and they paint quite visceral imagery. If you enjoy epic fantasy worlds filled with action and drama, grab yourself a copy of War of Mortal Gods.