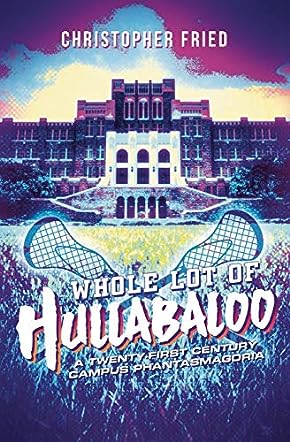 Whole Lot of Hullabaloo by Christopher Fried is A Twenty-First Century Campus Phantasmagoria. Troy Thomas has no idea what he wants to do with his life but lives a normal college life – attending class, watching the women, and going to parties. He and his best friend, Ian Mueller, meet up with potential girlfriends and everything seems to be going just fine. Until one night, at an off-campus costume party, Ian arrived dressed as a character from Miami Vice in blackface and, while all seemed well, Ian suddenly receives communication from the admin at the university that another student had complained of being offended. Threats of the local media abound and everything goes to pot as everybody seems to have become involved – even a group of militants. Troy needs to find out who he is and where he stands in all the madness and to discover whether a lifelong friendship can stand the tension.

Whole Lot of Hullabaloo by Christopher Fried is satire at its best. Although he says it is partly nostalgia for the 80s/90s pop culture, it is a stark look, albeit a humorous one, at how quickly seemingly innocent events can spiral out of control because someone somewhere is offended by something you may have done or said. It will have you laughing and it will also have you thinking but it is entertaining and shouldn’t really be taken too seriously. The characters are an eclectic mix, colorful, well-developed, and all relatable in one way or another. The plot is solid and the story moves at a decent pace. You will become immersed in it and you won’t want to put it down. I guarantee that this is one story you won't forget for a long time after you finish reading it.

Christopher Fried’s dark humor is intelligent. In his satirical novel, Whole Lot of Hullabaloo: A Twenty-First Century Campus Phantasmagoria, he examines how society talks about race and racism and the resonance of such discourses from the rational to the irrational. Everything is going well for Troy Thomas in his sophomore year at Central Ohio University. He is just one of those typical dudes who go to class, attend parties, and want to score with the ladies. But then his best friend, good old Ian, shows up at a party dressed in blackface, and it does not help when Ian says that he is Noogman from the best show of the eighties, Miami Vice. The problem escalates when Dominique Fisher, a member of the Black Students Organization, demands action from the university against this microaggression. From militant students to an academic specializing in the study of buttocks, Troy will try to find his place in an identity-sensitive community that will test his friendship with Ian in the process.

Christopher Fried has a sure hand in the way he writes dialogues that reflect diverse opinions about culture and race. He understands instinctively how an isolated affront could stir a community to carry pasquinades of protest in an age where there seems to be no clear line between valid offense and snowflake triggers. What better setting to explore and examine issues like perversion, cheating, and stereotyping but the university campus, which is a melting pot of diverse characters coming from different walks of life. This book may be teeming with absurdity, but it is a thin veneer that vastly criticizes political correctness and challenges revealed expressions of whiteness and blackness. For a novel that tackles a sensitive subject, Whole Lot of Hullabaloo has a comedic tone that helps to make it a wildly entertaining read.

College life has nothing spectacular to offer Troy Thomas, a sophomore at Central Ohio University. But he enjoys hanging out with his best friend, Ian Mueller. Troy did not see the disruption coming when his best friend attends an off-campus party, wearing the costume of a Miami Vice character. First comes a letter from the administration telling Ian that a fellow student is offended and wants to take the incident to the local media. It is not long before a whole bunch of characters is involved, each with their own agenda — militants, an eccentric and popular preacher, a professor and researcher who has worked himself into righteous indignation, embittered by the fact that no one cares to see the revolutionary power in his pioneering work in the field of natesology. In this whole lot of hullabaloo, Troy must uncover his identity and answer the question: Where do I fit in?

Whole Lot of Hullabaloo: A Twenty-First Century Campus Phantasmagoria by Christopher Fried offers a humorous portrait of the 80s and the 90s, a period characterized by the emergence of pop culture. This is a fun read with sophisticated characters in which the clash of interests within an academic set-up is skillfully written. Characters like Troy, Ian, Sam, Herbert, Dominique, and Dante, as well as a bunch of others, are meticulously and elaborately written. The dialogues are well-crafted and they capture the drama characteristic of Christopher Fried’s writing. While this novel is a spellbinding comedy, it is infused with thought-provoking passages and features situations and a setting that many readers who have been to college will easily recognize. There are powerful statements that readers will underline, like this one: “unlikely heroes are often the most courageous.” Christopher Fried’s novel takes readers on a hilarious ride, and the witty one-liners and boisterous characters elevate the experience of a familiar world to an exquisite adventure. It is filled with heart, biting humor, and characters that readers won’t forget.

Whole Lot of Hullabaloo: A Twenty-First Century Campus Phantasmagoria by Christopher Fried is a hilarious story brimming with humor and suspense. The reader is introduced to a wonderful cast of characters and to what it feels like to be in college. Troy Thomas is a sophomore at Central Ohio University. His college life is just normal, nothing exciting, except like everyone else, he is going to class and attending parties with Ian Mueller, his best friend. But all of the doldrums he has been through change when his best friend attends an off-campus party dressed like a Miami Vice character in blackface. Soon, Ian gets a letter from the administration stating that a fellow student is offended and threatening to bring the whole thing to the attention of the media. This sets the scene for a drama that will involve an eccentric set of characters, including militants, a popular preacher from Columbus, and many others.

This is the story of a young man trying to define himself in an environment characterized by identity politics. The setting reflects, in a brilliant manner, the pop culture and the fever that characterized the 80s and the 90s. The writing is excellent and the characters leap off the pages with a lot of life, from Troy to Ian, to Sam, an ex-military turned college administrator, to Rachael, to the fiery, controversial Dominique, and many others. Christopher Fried has a unique gift for humor and it is enriched by the witticism that permeates the writing. The descriptions are terrific. There is a lot I enjoyed in this novel, and apart from the deft writing and clever plotting, the author fills the story with insightful passages, capturing cultural elements of the setting with a unique skill, and offering statements to ponder in the exciting dialogues. Whole Lot of Hullabaloo won’t disappoint anyone looking for a hilariously fun read.

Whole Lot of Hullabaloo: A Twenty-First Century Campus Phantasmagoria by Christopher Fried is the coming-of-age story of a young man called Troy. Troy Thomas was a regular college student. He may not know what he wants to do with his life yet, but he enjoyed college life and his friend Ian. Things were fine until they weren’t. One grave mistake by Ian turned Troy’s life upside down. Before he knew it, Troy was questioning his friendship, his purpose in life, and how he tackled his everyday life. He was aware of many more people and things than he wanted to, and now that he was made aware, there was no going back for him. There was a whole lot of hullabaloo, and Troy was caught in the middle of it. Will he survive this chaos? Or is his life going to be changed forever?

I was not expecting Whole Lot of Hullabaloo to be this intense. I thought this would be a classic coming-of-age story of a young man who was barely an adult. However, I was pleasantly surprised. Troy was far more complicated than he and I gave him credit for. He was a logical man, naïve, yet he didn’t let that hold his potential back. The narrative embodied college life well. It was bizarre and chaotic at times, but there were lulls of deceptive calm that put Troy on edge. The pace was perfect for growth and development, something that the narrative didn’t lack at all. I enjoyed the different subplots, the descriptions, and Troy’s reactions the most. He was perfectly imperfect, a human character who questioned his life and decisions when the opportunity arose. Christopher Fried did a fantastic job creating a satirical story that kept me thinking about it long after finishing it.