This Is All He Asks Of You 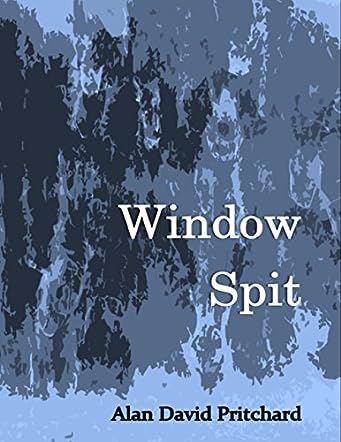 Alan's poetry has appeared in magazines, anthologies and websites worldwide since 2000. In 2005, he was made Poet of the Month by the then London Poet's Letter Society, and he was invited to read at the Poets' Cafe in Covent Garden, London. In 2011, his first collection of poetry, 'Advancing Backwards' was published. His video poem 'Like So' was an official selection at the 2013 Visible Verse Festival in Vancouver, Canada. His second poetry collection, 'Window Spit' was published in 2017.

Window Spit is a collection of forty-one brilliant poems by Alan David Pritchard. Arranged in two sections, Looking Out and Looking In, the first deals with a broad range of contemporary subjects which will be familiar to most of us. The poem ‘Window Spit’, along with ‘Concentration Ban’, ‘Reduced to This’ and ‘Distance’ observe our obsessive use of smart phones and social media, our pathetic attention span and incessant search for instant gratification. Pritchard goes on to comment on the mess we have created in the Middle East and the resulting wave of suicide bombers; our shock and distress when we experience terrorism close to home, while terrible deeds are inflicted on innocents around the world, and in response, our media presents us with daily drivel about the lives of vacuous celebrities. The later poems in this section seem to demonstrate the poet’s loss of hope and optimism, with ‘Crisis’ highlighting his despair of being able to help and ‘Dark Matter’, along with ‘Supermarket CCTV’ and ‘Strangers’ bringing this first part to a somewhat stark close.

The second section, Looking In, is more introspective. Here, Pritchard talks about his own feelings and viewpoints. ‘I Need to Know’ is a brilliant piece of verse and ‘The Letting Go’ is a cleverly succinct observation on the creative process. ‘Impotent’ has some memorable lines; ‘unwanted smells that stain the walls like regret’ lingers in the memory, and ‘Shark’ is a scary vision of one man’s struggle.

I have to admit that Window Spit is my sort of poetry; direct, unflinching, in your face, but most of all, honest. The language is down-to-earth and if you are offended by the occasional swear word I would suggest you skip the poem 'Shut The Fuck Up.' Alan David Pritchard has avoided abstract imagery and oblique metaphors, presenting us with an accessible, thought-provoking, hard-hitting collection of which he can be justifiably proud. I encourage you to read Window Spit - there are some sparkling gems in there and you will not be disappointed.

Poet Alan David Pritchard offers readers a glimpse into the world as he sees it in Window Spit. Divided into two sections, “Looking Out” and “Looking In,” Pritchard’s poems provide interesting commentary. He begins with thoughts on such things as social media and its effect on the world. Thus readers view how people use Facebook to provide nonstop commentary on their views while taking offense at the views of others; how folks prefer scandals over art; the oddity of watching our fellow man “participate” in worldly ventures such as visiting museums while at the same time they sit watching their phones and hiding behind their screens; and more. This section shares thoughts on world terror events (in works including “Just Sayin’” and “Selective Bleeding”), ingratitude and cultural differences (in “Crisis”), and the mysteries of coincidence (in “Supermarket CCTV”), among others. Perhaps my favorite is Pritchard’s suggestion of what God might say today if He asked mankind for help, as people are too afraid to get their hands dirty or may be simply uncaring about the problems of others (in “Strangers”). Moving on, in the “Looking In” portion, poet Pritchard shares internal thoughts about such things as being a poet (in “I Need to Know”), and solitude (in “Party”), and more.

When I read poetry, I’m looking for interesting word pictures and thought-provoking phrasing. I prefer insight into circumstances that challenge my way of looking at the world. I prefer to read pieces that speak to me, rather than those that come across as mere combinations of colorful words. Alan David Pritchard delivered the kind of poetry I enjoy reading in Window Spit. I found myself readily highlighting phrases (such as, “They go to an art gallery to stare at their phones,” “I cannot touch you unless you’re behind a screen,” “It would have been way less complicated to have stayed at home. But who, then, would have witnessed my overwhelming desire to be ignored?” and “the aftershock of a throwaway comment; the rift of an unhealable scar”). If you are looking for a thought-provoking book of poetry for your coffee table or desktop, something that will prompt meaningful conversation with others, pick up a copy of Window Spit.

Alan David Pritchard spills his thoughts and those of others in Window Spit. Victims of wars, perpetrators of wars. Poetry of poets, people pestered by poetry. Makers and losers of love. All mixed up in a happy dance of words and blank space. Some rhymes are quite sweet, others very sad but thoughtful, and yet others laced with acid and arsenic. There are 41 poems in total – about half are under the label “Looking Out” and the other under “Looking In.” The first set mostly focuses on others, while the second generally expresses the author’s (or speaker’s) inner thoughts. There is some language, which might bother some people, but not in every poem… just four or five.

I was intrigued when I saw the title of Alan Pritchard’s book, Window Spit. I appreciated every poem. Some were very deep. One or two seemed to make no sense (to me), but maybe they weren’t supposed to… even sense can be senseless at times. Other poems made me want to take action and help fix the world’s problems, especially the ones bemoaning violence and the lives destroyed by it. Out of all the poems, my favorite was “The Chosen Few” about a few lines of poetry that didn’t make it to the printed page: “We inhabit a world of lost socks and missed trains/We are ill-fitting similes and forgotten refrains.” Another line that really struck me (from a different poem): “Imagine, if, when our lives face dangers,/ God replies, “Sorry – I don’t talk to strangers.”

Window Spit is an anthology of prose and poetry, largely focusing on the highs and lows of current events. Written by Alan David Pritchard, Window Spit is in keeping with modern themes; the language of social media is often used, giving readers of all ages a firm grip on the message the author is trying to convey. Done in such a cleverly non-subtle way, topics of social media trolls on Facebook and Twitter and the controversial discussions taking place between strangers who will never meet take the main focus, much of which so many people can relate to. People who dare to post things non-inflammatory (or boring) are often flamed and trolled, showing the sad direction of today’s world.

Whether the offenders are drama queens or those with very short attention spans, Alan David Pritchard has captured the essence of today’s internet media networks which seem to fit a full week into a day. As topics quickly change, it is not long before people start to complain about their varied opinions of the stranger on social media. Our attention spans range from vast to minute, and the slightest change of subject brings on either a fit of giggles or a brawling internet row, regardless of whether we know the poster or not, or even know much about the topic. Unchecked facts can lead to incredibly heated discussions, with some going as far as seeking out the person responsible, in real life, for their post.

My favorite verse is that titled “Reduced to This,” which deals with the current trend of selfies, amidst reading the latest scandal. It puzzles me how people always have their noses inside their phone or tablet, missing the beauty of what is happening around them, whether at home or abroad, in friendships, in politics, in romance and in nature. I very much enjoyed the verses in Window Spit and recommend this highly topical book to readers aged over 15 years so they might realize that there is a much brighter world right in front of you, and not behind a tiny glass screen.

Beginning with the poem entitled Window Spit, writer Alan David Pritchard presents a varied array of works in his book of poetry with the same title. There are two sections of poems – the first is Looking Out and the second one is Looking In. The Window Spit poem describes the writer’s reaction to a friend’s offensive post on Facebook; he will send out a tweet later in the day in response. Another contemporary topic that is explored is the various ways people relate to each other in the world of electronics – whether it be by concentrating on their cellphones when together, the use of text messages, or surveillance videos in the supermarket. The presence of bombings and other dangers are also examined. The Looking In section is written from the introspective, deeper point of view of the poet himself.

Writer Alan David Pritchard presents refreshing, and thought-provoking, poems in Window Spit. These works are an examination of today’s world. He utilizes known images, identifying the incongruous aspects within our experiences. Within a few lines, he talks about finding two yolks within an egg – and the fact that two children in Afghanistan were shot in the face. His poetry presents one juxtaposition after another, forcing the reader to think beyond the mechanical way we live every day of our so-called modern lives. This book is striking in its honest observations and in its sophisticated simplicity. This is a book the reader will not forget, as the poetry is truly provocative and captivating!